Why We Need Politicians

This time of year, bashing politicians is the great American sport. We have been deluged in absurdities, tortured by robot-calls and threatened by the destruction of all we hold dear if we don’t send in our $5, again and again and again.

I was listening to a TED talk, proposing that, with the wonders of the internet, we could do great things by having us all vote on bills – true democracy!  Could this be the answer? 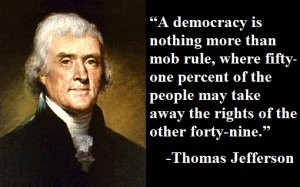 No!  Please, please no!  Our system is not a true democracy – and I like it that way.  Have the general population vote on issues?  Have you listened to the “general population” recently? I fear what we would get is rule by those that show up on public comment boards on the internet.  The ones who call each other a**holes and can’t put together a coherent sentence.  Yeah, I know a lot of people who comment intelligently and politely.  But I fear the volume of the screamers will drown out those more reasonable. 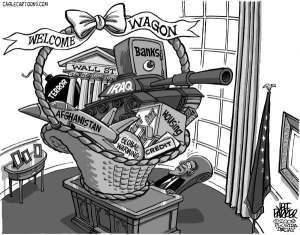 While working for state government over six years, I got an appreciation for what people in government -including politicians – cope with.  They are constantly pulled at by people coming from all sorts of viewpoints.  “Spend here!!”  “Lower costs!” “Back what I want!”  “Look the other way!”  Good politicians have the skill to appear to listen to all of these, yet make a single decision.  I do not have that skill.  I would be stark raving mad if I had to plot a course though all those influences.  Thank god we have people – however much I may disagree with some – who are willing to be targets for all our hopes & angers!  Thank god they have people on staff who read and study the options.  I’m willing to pay for that.

You don’t want me tweeting my vote on bills I haven’t seen and don’t understand.  My part – and yours – is to vote.  As George Takei, the original Star Trek Sulu,  reminds us, “Our democracy needs the participation of its people to remain robust. …While voting is a right, it is also a privilege that many have fought and died to win and retain. ”

By the way, I was complaining to a poly sci grad from another country about how our system was a pendulum that swung back and forth – more civil rights to fewer, less favoring of corporations to more, etc.  It makes it hard to see progress. She remarked, “You have swings of the pendulum; we have revolutions!”  Gulp.  I guess our founding fathers knew what they were doing after all.

Aquarian, with Virgo/Leo rising. An infrastructure kind of person ("Hmm, I wonder how this works!") Former engineer. Training designer. Crystal healer. I have a private practice using stones, hands-on energy, bodywork to release blocks, fill in gaps, and allow energy to flow optimally.
View all posts by Lindsaysf →
This entry was posted in Musings and tagged democracy, politicians, politics, Takei, voting. Bookmark the permalink.

1 Response to Why We Need Politicians